It has taken me 9 years to finally post a description of myself.  It's been a busy time!

In my early years, I graduated from Royal Roads Military College and was a Captain in the army.  Not always easy, and I had a habit of doing things the hard way, but I do believe that that experience has made me a stronger person and a better leader.  Following that, I was an inside sales rep selling enterprise computer systems in Ottawa back in the day when they would hire anyone to sell technology, and the blind were leading the blind.  For example, I once had to ask my boss, "what's an I/O port?" and he thought that someone was playing a prectical joke on him.  If you're a techie, you'll find that funny.  If not, it doesn't matter.
So rather than pursuing what probably could have been a lucrative future in tech, I took 2 years to do an MBA at the Ivey School of Business at UWO in London Ontario.  That was a real eye-opener to the "real world" (meaning the world of business), and then I took 5 months to sail the South Pacific with someone I'd met on the internet.  True story - a good guy and a great sailor, but I suffered motion-sickness, so once we got to Tonga we figured nothing goes to windward like a 747, and I was off to Sydney!  In Sydney, I hooked into a bit of work while crewing in races at CYC, and then met the receptionist for BCG at Kwik Copy while I was printing resumes... 6 interviews later, I had my "dream job" as a consultant with Boston Consulting Group.  Great people, lots of work, a hell of a year, and then the tech bubble burst - none too soon, as by then I'd met Kieren (at a dance class), gotten engaged and pregnant, and didn't feel that traveling 5 days a week or working 10 hours a day suited my parenting style.  In fact, sipping lattes with my friends while Kieren slaved away at work was my ideal parenting style.  I've erased the rest from my memory.
So then, with one daughter born (Sammie), and another on the way (Gaby), it looked as if the company where Kieren worked as Treasurer was going to be sold, and we had to decide whether to move on to something else, or whether he'd get into the next leveraged buyout.  I liked the idea of running our own business, but I was short on ideas.  Thankfully, Kieren had hundreds of them, so I just had to filter through them all to find the good ones.
We found Rossland BC, and loved it, but it was apparent that the resort was in need of a new owner with deeper pockets and some new ideas, so Kieren created a business plan and shopped it around, in the hopes that we'd be involved with it in future, or at the very least that the town wouldn't die when we moved there.  He found a potential buyer, but the resort also found a buyer at the same time, and their buyer was the successful one.  That suited us fine, since the most interesting part of the plan for us was the idea of a cat skiing operation up the highway, based out of Rossland - so that's what we did.
After baby#2 was born, we moved to Rossland to get it all ramped up.  I joined Century21 and sold real estate for a couple of years as well, but after a wild real estate Christmas party, where I vaguely remembering slapping a leather-clad Elvis' butt with Ardis, I fell pregnant with baby #3 (Freesia).  Note: never mix the "rhythm method" with alcohol - and if you want someone to actually go through with a vascectomy, drive them there yourself or they'll "get too busy at work and forget about it."
So in 2005, we started operating, and I ran the office out of the house, with a newborn, a 2 year old, and a 4 year-old.  Too easy....A couple of years later, with kids off to school and daycare, we set up the office in the a-frame cabin, and then a year later purchased a proper HQ for the growing business.
Eventually, I'll hire someone else to run the office, and I'll spend more time skiing with guests and sipping cappuccino, but for now, when you call, I'll probably be the one answering the phone.  But it's our own business, and I love it.

Kauri is a key member of the team and a lead guide.   This will be Kauri's 10th season with Big Red Cats - he's been with us for so long he even worked on our house before we moved here.   Kauri is has the CSGA2 and CAA2 qualification and leads groups.   Kauri has worked most of the summers building new roads and new runs and as a result Kauri knows the Big Red Cats area as well as anyone and better than most.    Kauri is focused on safety and fun with guests.    Like all guides at Big Red Cats he is focused on creating great teams of guests and guides each day.   Kauri is also a ski instructor and ski patroller at nearby Red Mountain, and is father to two skiing sons. 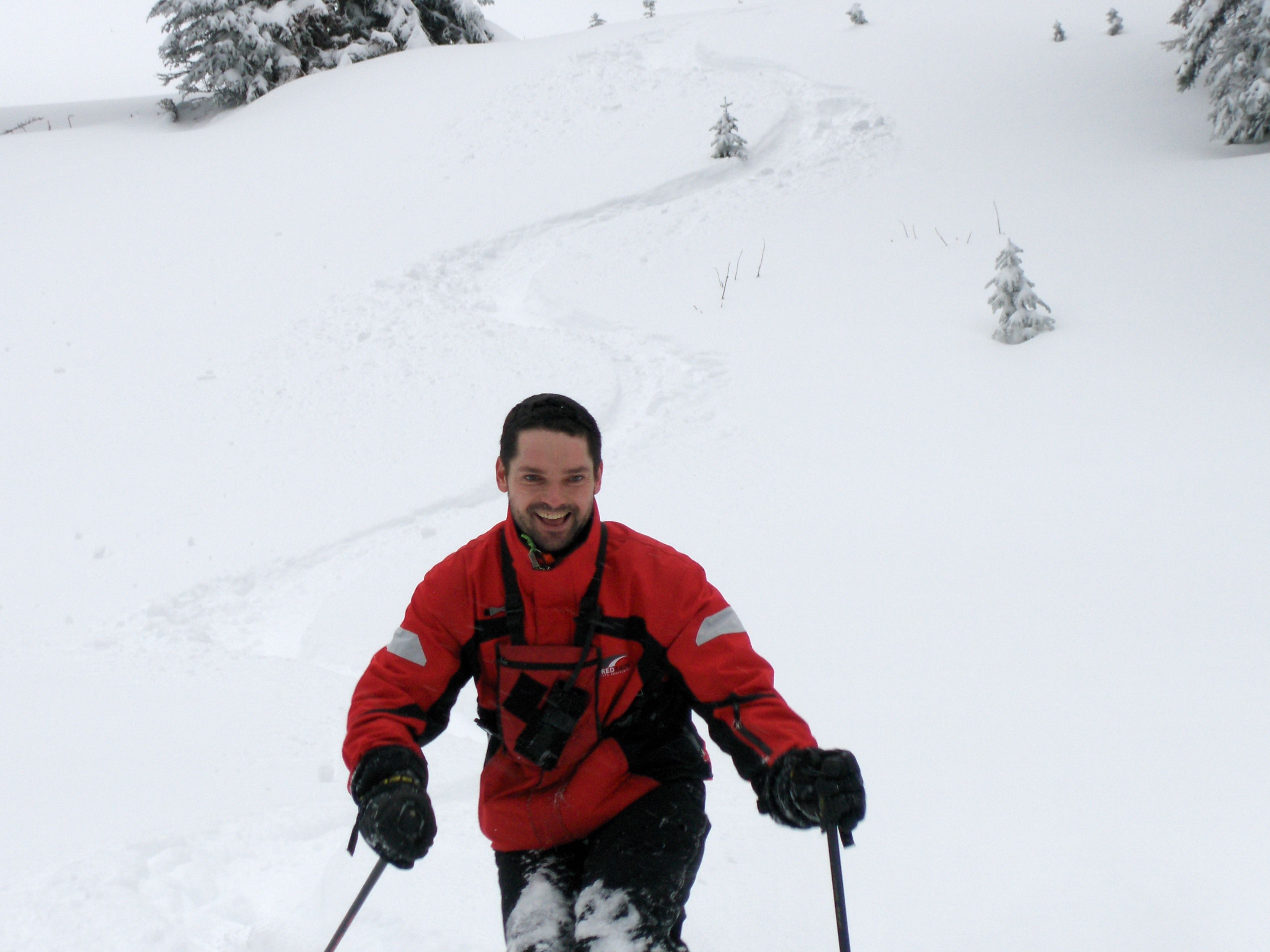